CAUTION: Not for the weak at heart or those who rodent feared.

Sitting on the couch.  Home alone.  I spot a furry ball walking leisurely across my kitchen floor.

I already knew the little turds were back.  I’ve seen their droppings.  I’ve cleaned up after them.  I’ve moved kitchen supplies around.  I’ve seen dead ones in sticky traps.  I’ve spotted them running across the mud room floor.

This one had it coming.

He took his own sweet damn time.  And I’ve had enough.  Shaking I screamed at Shiloh and asked her to get it.

She walked over.  Sniffed him.  Then walked away.

So I decided I was going to save his life and sweep him out the back door on the porch.  He was slow enough and I had time to grab the broom.

I grabbed the broom and he took off so I did the only thing I could do.  I screamed as loud as my mom would have if she had been here.  She HATED mice.

And I smashed the crap out of him.  His little legs started to move again.  So I smashed at least a dozen more times until blood splattered.

And then I puked. 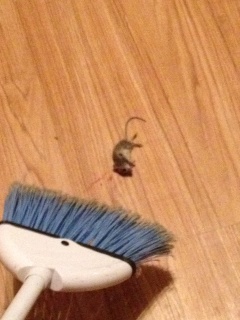 And now I’m so traumatized by the whole darn event that I felt like you should be as well.
Sorry for the detailed description and obvious visual.
But I basically wanted you to see how much of a bad ass I really am.
Feeling Feisty and Nauseous,