Lately I’ve been craving Benihana because we recently went there with friends to celebrate a birthday.  I had never been and was worried that I wouldn’t like the food.  I was majorly wrong.  I fell in love with chicken and steak fried rice.  It was a heavenly blend of shocking new flavors and surprises to my taste buds.

So, to save some money in our pocket books I decided to attempt a recipe I had pinned.  I then found several variations of recipes so I decided to combine what I liked from each of them and make my own.

First I cooked my rice in the Pampered Chef Micro Cooker and then set it aside.

Then, I chopped up the chicken into large bite size pieces (next time smaller) and sauteed them in some olive oil.  All the recipes recommended sesame oil…but we didn’t have any.  I may try sesame oil next time to see if it adds even more flavor.

Then I poured in about a cup of frozen mixed veggies.  The bag we bought had green beans, carrots, peas, and corn.  I also added about half of a chopped yellow onion.  I let those veggies cook for about 2-3 minutes….

And then I dumped in two eggs I had whisked together….

After the eggs started cooking I started chopping and scrambling the egg up with the cooked veggies. 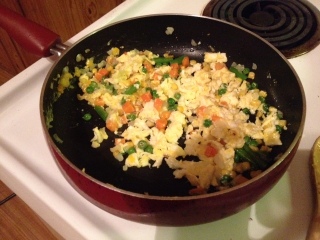 Then I added the cooked rice, chicken, and soy sauce. 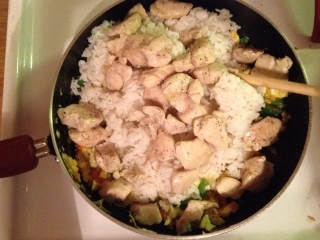 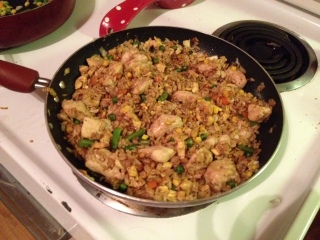 And to be completely honest I made so much chicken AND rice (way overcooked like I typically do) that I actually had two pans going. 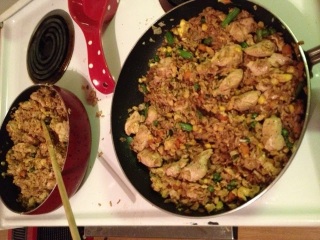 We will be eating on chicken fried rice for days.
Good news is it tasted pretty darn close to Benihana’s.  Bad news is that I got white rice and learned from my trainer that brown rice would have been better.  Plus, rice is a lot of carbs and I’m trying to stay under 100 grams per day.  However, I’ve been really good with my carbs at breakfast and lunch lately so I suppose if this were my dinner occasionally it wouldn’t be awful.
Anyone want leftovers for lunch tomorrow?
Stuffed and Content,