Just over two weeks ago we sat on a boat in the middle if Lake Monroe and decided we had
to make the trip to Chicago to see Garth. Definitely a prompt from my cousin and his girlfriend mentioning they were going helped. (Thanks Sarah and Matt!)
I will forever be grateful that my guy said “sure, ok” to a 3.5 hour trip north and a hotel stay. It was totally worth it. Not to sound cheesy, but it was practically like a dream come true. I kept telling him last night during the concert that it kind of seemed unreal. I never actually thought I would see Garth Brooks in concert. This wasn’t Mike’s first Garth concert, but I could tell he enjoyed it just as much as I did
I have so many fond memories of listening to Garth as a child. We listened to his tapes in the old Cadillac or Astro minivan. We listened to him on the old stereo on Saturday morning when we cleaned. We listened to him all the time.
I can remember in elementary school school taking his CD in to music class.  The music teacher told us to bring in our favorite song.  Mrs. Lockwood was going to let us play our favorite song for the class. We had to tell what type of music it was and then everyone got to listen.  I can remember hearing some Boyz 2 Men, some Mariah Carey, probably a few of TLC, and I’m sure a few rap songs from the boys.  (Nowadays there is no way in hell we could allow kids to bring in their music to listen to!)
My choice was from Garth’s album “In Pieces”. One of my a favorite fast songs of his….”Ain’t Goin Down til the Sun Comes Up”
Looking back….I’m shocked my mother let me take that in.  I’m shocked I didn’t get in trouble.  I mean….the lyrics are a little risqué.  At the time, I had no freaking clue what that song was about.  I could sing all the words and I loved it but I have no idea what it was about.  Promise.
Another memory of a Garth song I have…..”The Thunder Rolls”. Every time I was with my grandpa and that song came on he would always say….”Sounds like rain’s a comin” That always made me giggle.  I remember riding on roller coaster ride and asking him to start that song over and over in their old green cougar.
Every time I hear “The River” it reminds me of him.  Like its a song that still speaks to me as if grandpa is still here.
I hear “Unanswered Prayers” and I think ……man I thank God that he didn’t answer mine so long ago in a previous relationship. I thank God he didn’t answer Mikes when he was in love in high school. So thankful for unanswered prayers.
I hear “The Dance” and I reminisce of old middle school and high school dances but most definitely the end of the county fair Friday night dance. Whatever boy I was crushing on and who I wanted to ask me to slow dance that year. And then I remember……thank goodness for unanswered prayers.
I hear “Two of a Kind” and I think of us. 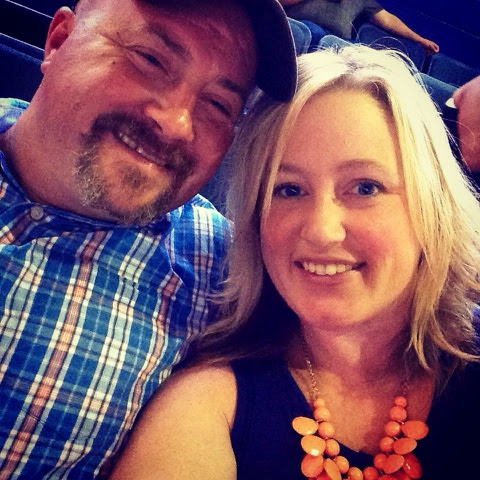 Our seats were so close…I couldn’t believe it. 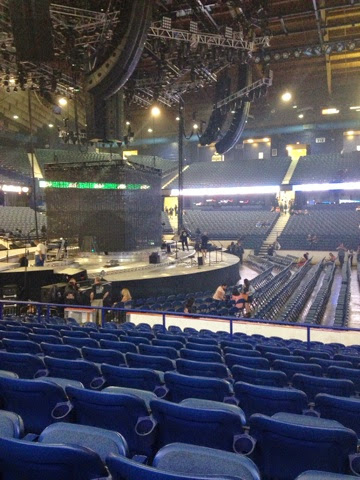 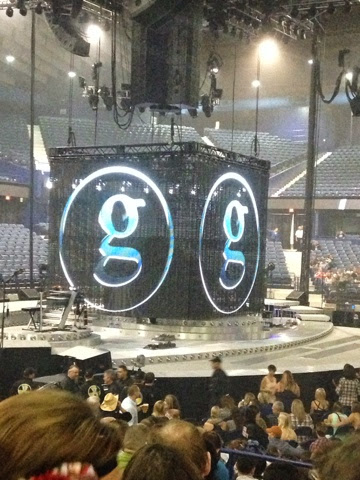 A one minute countdown til Garth!! 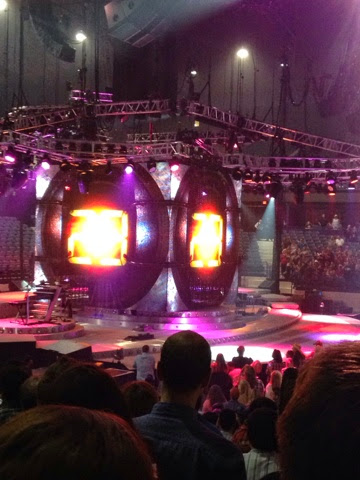 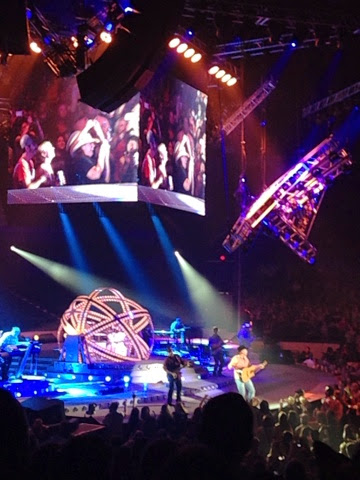 The drummer was in the ball thingy and Garth was a climbing all over it.  To be honest…I was a little concerned for his health.  He was all over that stage.  Sweating like crazy and screaming and yelling.  I sure hope he makes it through his whole tour and stays healthy! 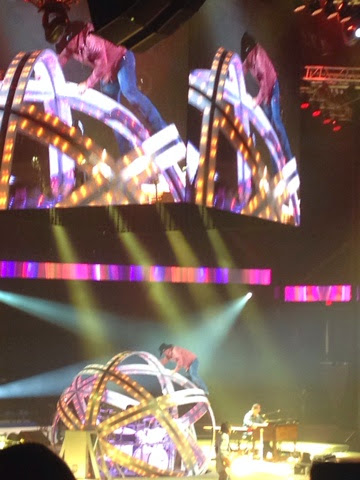 This man puts on one hell of a show. He sang and moved the entire time.  He is nonstop.
Simply an incredible show. 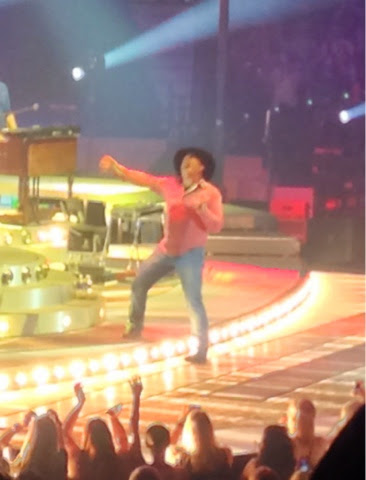 Throwing water into the crowd… 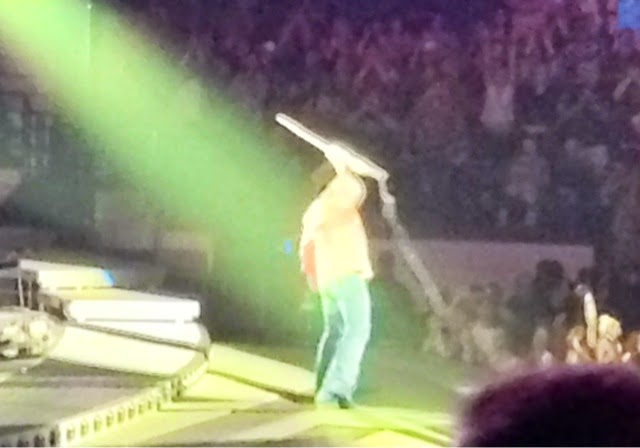 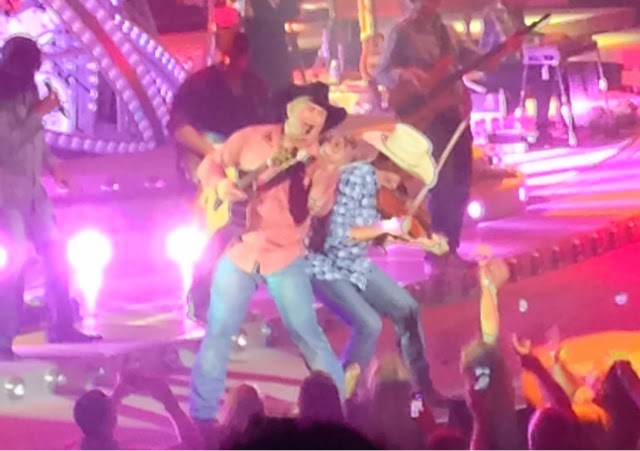 He played so many of his most amazing hits.  I can hardly think of anything he didn’t play that I love and listened to.
He also played two of his new songs, one in particular that I loved and can’t wait to hear again….”People loving People”. Every single person in this world should listen to this song. It’s like a manual for what we need to fix this crazy sick world. We just need people loving people.  If you have heard it…I highly recommend it.
Here are the lyrics…
“People loving People”

Doctor, you ain’t got a pillFor whatever’s makin’ this world illYou can’t get forgived inside the storeAnd peace, it’s a politician’s war

You won’t find no resolution inThe bottom of the bottleIn the stars, or AristotleThe only answer to the problem

Words aren’t what they seem to beAnd talk is cheap, but lies are freeWe fear what we don’t understandAnd we been scared since time began 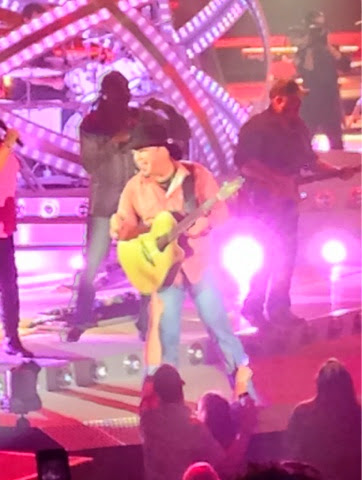 I could literally see the sweat dripping off of him.  Incredible. 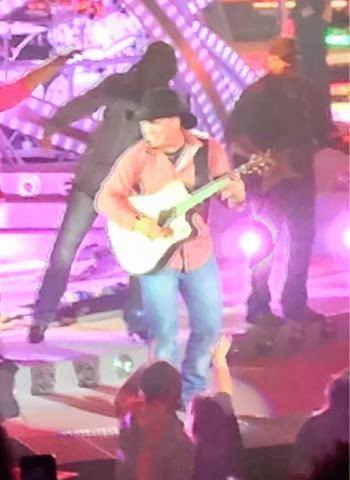 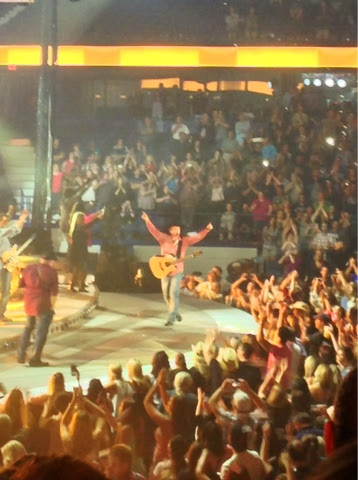 Then Trisha joined him and they sang one of my favorite duets “In Another’s Eyes” and she sang some of her favorite singles like “She’s in Love with the Boy” and others. 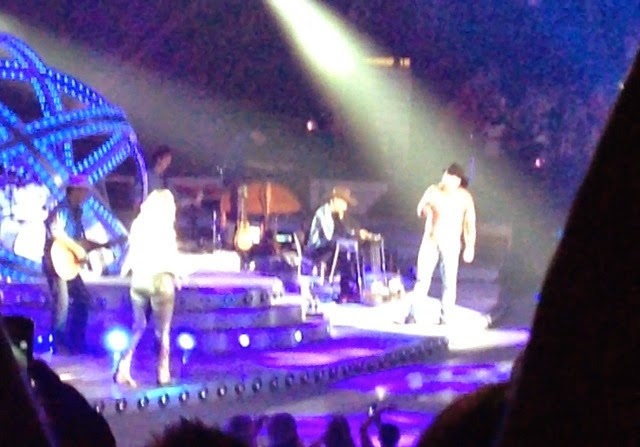 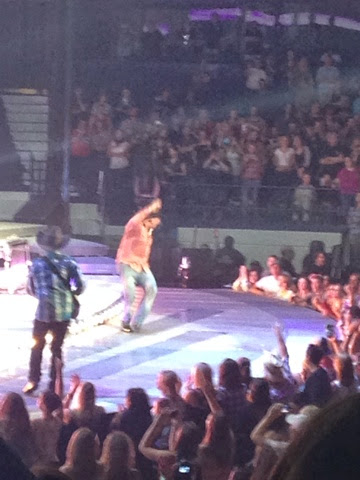 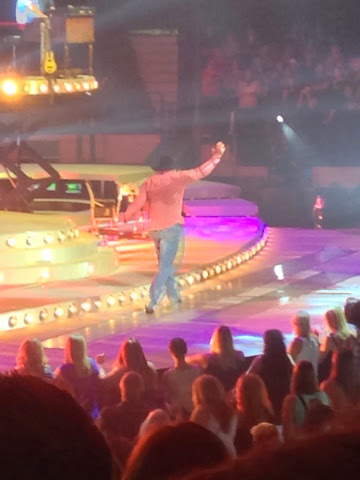 All of his melodies bring back memories.  That, to me, is the definition of an amazing musician.  A timeless musician.  Someone who puts on a show, not just a concert. Someone who makes you remember all of life’s greatest triumphs and most difficult challenges.
Someone who comes back after so many years!
Another check off the bucket list….