Last night we did it.

We had night #1 of transitioning to the crib.
This was beginning to happen too often and I think pretty soon he would have been out of that bassinet. 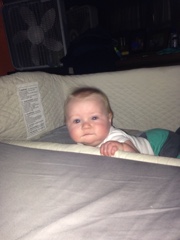 We bathed him. Read a story. And I nursed him in his rocking chair with the nature sounds going on the machine. He went down beautifully well. Without a peep. I did laundry and things around the house and our bedroom without tiptoeing around a sleeping angel. It felt strange. It felt good. I felt guilty. I couldn’t sleep because I didn’t know what to do with myself. I didn’t have someone to keep an eye on next to me and no one was fighting sleep next to me.
Eventually I gave in to sleep after countless trashy reality shows and shortly after at 1 am the beast woke up.
I texted his daddy who was still downstairs and he came to the rescue. Because if I had went in to rescue him we would have been right back to nursing in the night which I know he doesn’t need. Have you seen him? He’d prefer to work his way to childhood obesity by nursing all through the night but I’m on to him. I know he can sleep through the night because up until a month ago….he did!  He never woke up and he never needed me. Then 5 months hit and all hell broke loose.
I had heard of the 4 month sleep regression but Easton decided to trick us and wait until 5 months. It was part of his plan just to make us think he might have slipped that lovely little crap of a growth spurt everyone warns you of.
Well, he didn’t. He’s just a little behind schedule.
So from 1 am to 3:30 am he battled. He fought hard. His dad never gave up. He’s the most patient man I know.
Meanwhile I cried in the bedroom next door. You see I’m the milk machine. The food source. So I can’t go in to rescue him.  At one point I went in crying to his dad who I’m fairly certain wanted to smack me and say “Get the hell out of here….you’re making it worse!”
I cried because my heart was breaking. I just wanted to hold my sad and pitiful little baby joy and snuggle him back in bed with me.
Through this I’ve realized this is how bad habits start. Parents give in to the battle and let little ones sleep in bed like we have for the last month because ya know what? Everyone just wants some fucking sleep.
At 3 am you don’t give a shit what kind of habit you’re starting. You just want sleep.
I use to judge people that let this happen. I use to think and say and think things like “I will never allow my child to sleep in bed with me.”
Here’s what I’ve learned. For whatever I’ve said “I will never……….” I will.
I most certainly will.
Yet another example of karma folks.