Our sweet boy is already 10 months. 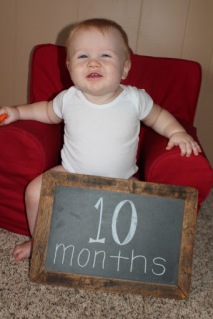 And the photo sessions are growing more and more difficult each time!  Imagine that! 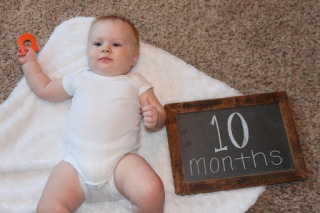 He’s never before touched the “monthly” stickers and this time he did not want that thing on him at all. 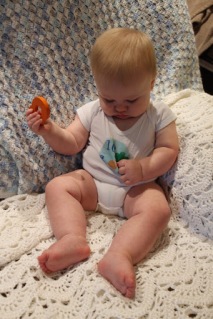 Nor did he want his photo with the lamb. 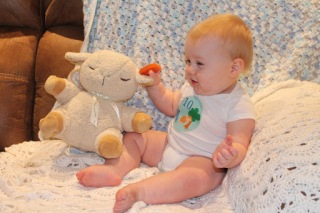 Nor did he want that chalkboard sitting in front of him… 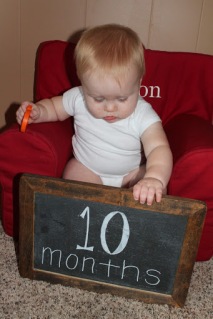 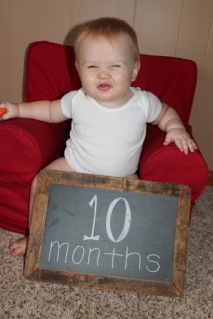 This time I wanted some photos with his new rocking chair that Papaw refurbished for him .

In this last month you’ve learned so much!

You’re growing and making your momma’s heart break and her ovaries ache for another one.

In the last month Easton has….

had some issues with biting, particularly his momma. When I figured out he had 3 teeth coming in one the same day I felt a little sorry for him. Thanks for sharing the pain.
made it a little difficult to nurse.  The biting and the latch with the new teeth have made me second guess or wonder how in the heck I’m going to make it a year with this.  But just like always, we kept going.  Currently the #1 question is “So…how long are you going to do that?”  “That” being nursing.  Some people I respond, at least 4-5 years just to see their reaction.  Most get the truth – at least a year and after that he and I will discuss things.  🙂
had a snotty nose a lot.  A lot.  Teething, cold, whatever it may be.
Chapped cheeks….from the snot?
been using his sippy cup much better and we even upgraded to a bigger sippy cup.
He’s even become an independent stubborn butthead at times and won’t let anyone help him hold it. Not cool, man.  You always need your momma.  Always.
had really smelly poo…..solid foods = let’s get potty trained quick so you can take care of this yourself, sir.
8 teeth by September 11th and the last 3 popped through really fast…like within the same day
had his first trip to the Kids Express Clinic (Minute Clinic for Kids) after a night of wheezing and barking cough and no sleep for us. The diagnoses was croup and a steroid.
4 days later another all nighter with inconsolable screaming and crying.  Went back to the doctor and within just those few days his ear became badly infected and went on an antibiotic.
The worst feeling in the world was seeing your baby scream inconsolably and not even being able to comfort with nursing.  Not knowing what was wrong with him made me ill. Awful.
developed a new love for the stairs….thanks to Aunt Cathy.
a fondness for kissing.  Open mouth kisses.  Juicy kisses.  We are working on blowing kisses.
He points to everything.  Especially that large buck mounted on Unkie Josh’s wall.  That thing really blew his mind.

a love for knocking anything and everything over and constantly diving over things giving me a heartache.  I even asked the Dr. at his 9 month check up – Is it normal for him to be suicidal?  To which she replied…yes, until he’s at least 4 or 5.  Yikes.

the crawl down….and he can go fast.  He can go particularly fast when you say “no” or his name.  As soon as he knows you’re headed after him he’s like lightning fast.

learned to make sounds with his finger and lips and even the Indian sound with his whole hand and mouth.  His new tricks are fun to show off.

the clap down.  He claps all the time.  And if you don’t clap with him he will give you a dirty look, try again, and basically make you want to clap with him because he’s so damn cute you just can’t resist.
every girl wrapped around his finger.  He’s a big flirt.  Waitresses love him.  It actually works out nicely because he tends to make a huge mess at restaurants but they’ve already fallen in love so it doesn’t really matter.
learned the game of Peek-a-Boo.
We play a lot of, “Where’s Easton?”
“There he is!”
Even in the car with his blankie back and forth over his head.
still had a love for books, particularly the ones with flaps, parts that move, or things he can feel and touch.  He’s basically gifted.  Right?
started getting out all the toys in the living room even though he still enjoys the good ole TV remote.  At Mrs. Jenny’s he really loves the kitchen and play food so momma’s going to get him a new kitchen for his birthday.  Shhhh!
He weighed in at home at 22 lbs. 14 oz. so he’s been sitting at that 22 range for a few months.  Major movement all day long has him starting to thing out.
Don’t worry, I plan on feeding him butter sticks to keep the wrist and thigh rolls going for as long as I possibly can.
Our month in pictures…. 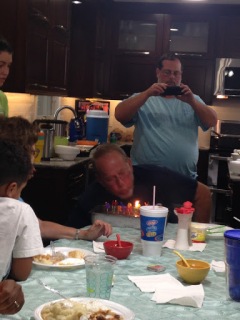 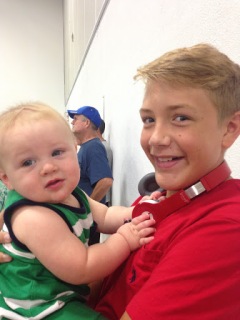 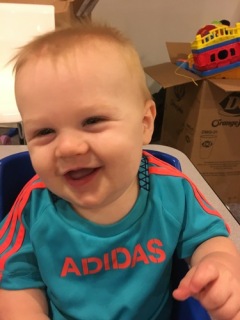 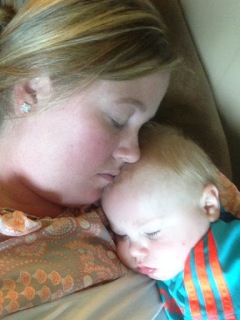 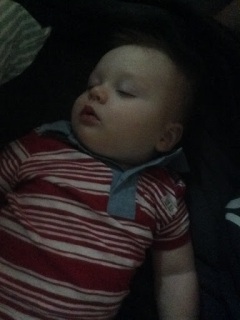 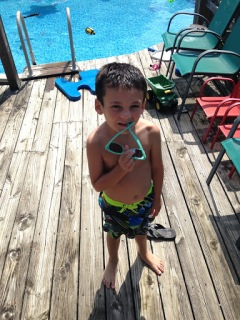 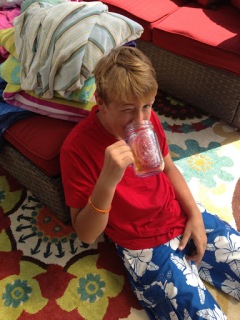 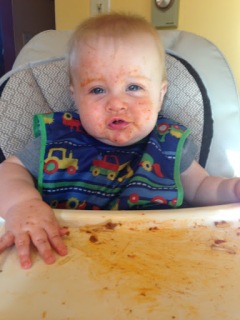 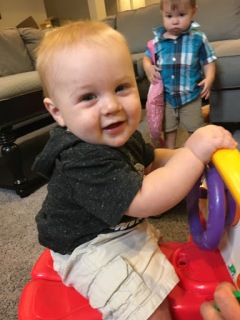 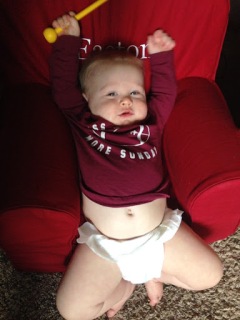 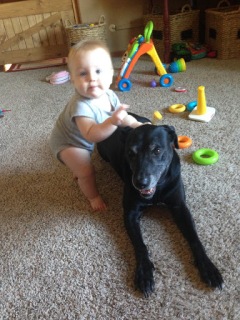 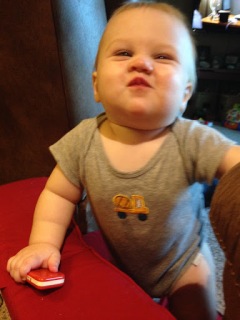 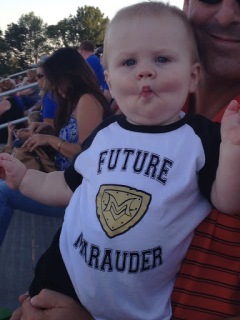 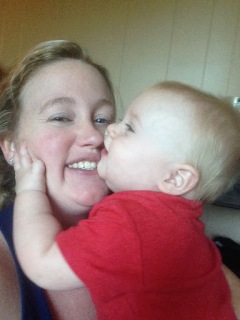 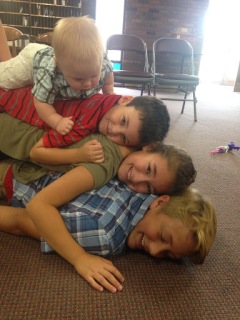 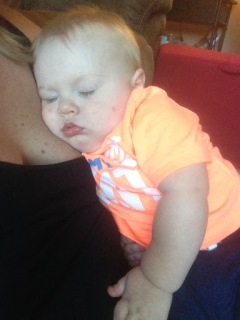 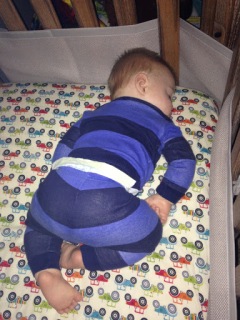 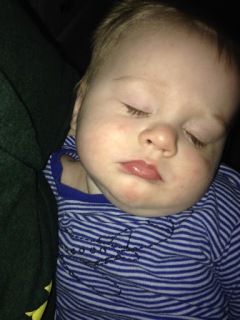 I know…I can’t believe it’s been that long either!