Last Sunday I was part of an “experience” as Theresa called it….and that it was. I have watched every episode of Long Island Medium there ever was.  I’ve emailed Theresa countless times for myself and my cousins.  I’ve offered up everything but my first born just for a chance to hear from my mom.

So, when tickets to see her at the Murat showed up this past summer of course we had to purchase and hopefully make an attempt to have that chance. My aunts, cousin, and sister are all huge fans as well so it was easy to decide who I would be going with. 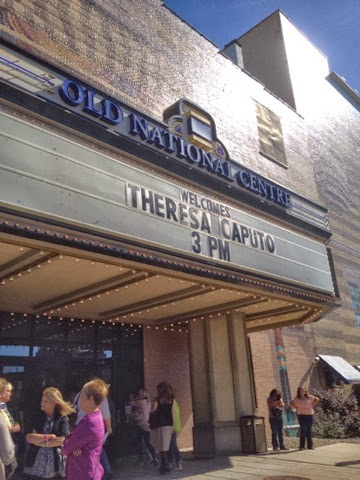 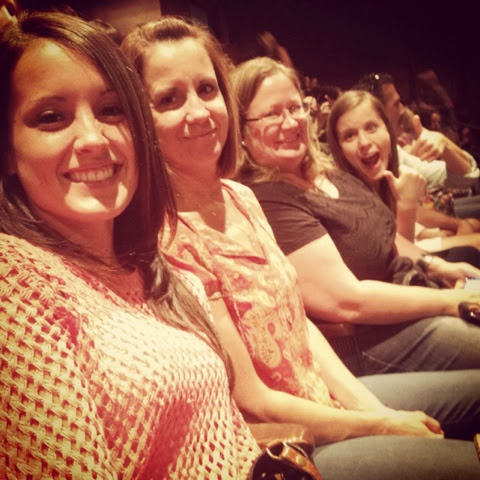 I was nervous abut the show…worried that I would be disappointed in the end results and not have the chance with thousands of others around to hear from my mom.  I wore mom’s class ring from high school that she had given me years ago.  I wore a pin with her birthstone that my dad had given me for her funeral services. The whole show I was rubbing the ring like a genie in a bottle praying I would be the next person Theresa wanted to talk to
Truth is….I was dead center in the balcony. My mom was going to have to do a lot of screaming to get her to pay attention.  Anyone who knew my mom knows she wasn’t really the hollerin type….well unless you were out of meat at Taco Bell (long story, tell ya later).
Most of the people Theresa spoke to were in the front rows or in the aisle seats. There was one or two on the main floor towards the back.
Another truth.  After a day or two and some deep thinking …..I realized those that did hear from their loved ones needed to hear from them just as much, if not more, than I needed to hear from my mom.
Theresa explained in the beginning that it would be an experience.  She didn’t stand on the stage and talk to people. She went throughout the audience and made each story personal.  Cameras followed her so we were able to watch up close as she spoke.  The stories were truly an experience. Each one I shed a tear. Some more than others.
A mother and grandmother hearing from her son who passed way to young.  A father and mother hearing from their son who also passed too young.  Hearing that his niece that was just born and named after him had a birthmark for a reason….because he had carried her through the womb and was there when she was born. A mother and grandmother who had each lost a son. One boy was epileptic and the mother still ached from not being able to save him after a seizure because she was at work being a nurse instead of at home.  Theresa talked about the guilt she would have carried had she been home and not saved him. We always have regrets. This moment spoke to me.  Parent who had lost a son being told their son was so proud they had remained together throughout the tragedy. A young woman who had lost a very young child and seeing her face when Theresa told her she would be able to have children again. And a young couple who had clearly battled many fights being told they might just be carrying twins.
There probably wasn’t a dry eye in the house at that point.
Theresa also explained in the beginning that even if we didn’t personally hear from our loved ones there may be things said to others that is our loved ones speaking to us through someone else.  At first I thought that sounded crazy. However, after hearing her speak to several there were little things I picked up on that I knew were things from my mom.
Really though, I know she’s always with me. I don’t need Theresa Caputo to tell me that. Although I would love for her to tell me some more.
More than knowing that butterflies I see and cardinals flying in they sky are her.  More than the lights flickering when I walk into a room or a moving shadow in the corner of my eye when I’m all alone. More than the twinkle in the littles eyes and the things they say and do.  More than sitting at my piano and feeling her sit next to me.
Just would like to hear a little more than that.  It’s like wanting to know the known. Which makes no sense.  What more would it really give me? I have no idea.
And that’s what I want to know.