Mother’s Day has never been that easy since 2001 but today I can’t quite get the smile off of my face.  I’m so excited to tell the world that we’ve been blessed with the gift of becoming parents….in November!

It’s been difficult to “blog” since finding out because it’s hard to talk about anything without blabbing about our great news.

So, let’s start from the beginning.

Since July last year we’ve “tried” to join the parent’s club.  We shared in sadness almost every single month when things just hadn’t quite been in the timing we had hoped.  We heard of others getting pregnant and I shed a few tears because I’m extremely impatient and wanted my moment NOW.

I received gifts of encouragement from friends. Thanks Patti!

I tracked my temperature daily and just about ran out of ovulation tests.  I tried the electronic and cheapy ones.  (fyi….the cheap ones are the way to go)

I waited for those smiley faces.

I used an app and told my husband exactly when the magic had to happen.  It almost became stressful.

Scratch that, I totally made it stressful.

We prayed a lot.

I cried a lot.

And then one weekend we went on a long hike in Brown County and I though, “man I am really out of breath.”  I had taken a test that was negative but still had some early symptoms and kept pushing them aside.

Too many times had I felt like I had the right symptoms and had proven wrong.

Monday of Spring Break rolls around and Mike heads off to work.  I hopped out of bed and decided….what the heck.  May as well try.

Then I was in total bawling, freaking out shock when that little faint line appeared.

So I did what every single girl does.  I told the dog and then panicked that the line wasn’t dark enough so I facetimed my baby making expert friend, Melissa.  Her sweet little boys answered and I screamed, “get mommy!  I think I have something to show her!”  She ran to the screen with makeup all splotched on her face and said “show me now!”  I showed her and she confirmed it.  I was pregnant!
I wanted to call my husband so bad but I also wanted to tell him in person.  So I told the dog some more.  She seemed to not care one bit.
That day I ran some errands and picked up a few things.  I might have stopped at Barnes and Nobles to use up some gifts cards… 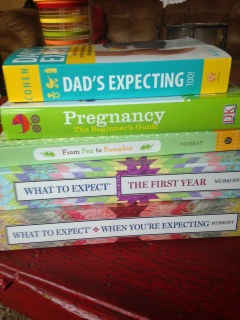 I also might have stopped at Babies R Us just to look around and buy something for my gift to daddy.
I sat on the couch nervous and excited and waited for Mike to come home from work.  He sat down and told stories about his day as I listened patiently acting like nothing was up.
Finally, I told him I had been crafting all day and asked if he wanted to see what I had made.

It was quite fun to tell my husband he was going to be a daddy.  You can watch below.

His tears were exactly what I needed.  I had wanted to tell him all day long on the phone but I was so glad that I had waited.
I had always saved the ring box he proposed to me with and used that to put in a pacifier. 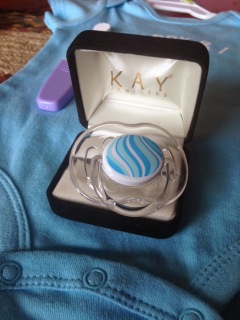 That night (March 16, 2015) we wanted to shout to the world our good news, but I already knew that wasn’t a great idea.
We’ve waited as long as we can to tell everyone.  We’ve heard our little cherubs heartbeat twice and we continue to pray that this pregnancy is successful.
The first time we heard the heartbeat we both cried.  It’s just the most incredible feeling to hear that heartbeat and see the little “bean” that is growing inside of you.

Last week we were able to see the progress and growth of our little one.  I’m still in shock by the change!

My best friend was so kind and gracious to help us get some pictures done for our big announcement.  They turned out wonderful and we did the best we could with a crazy dog! 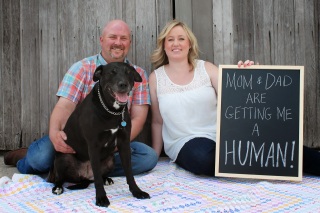 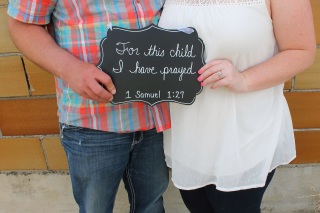 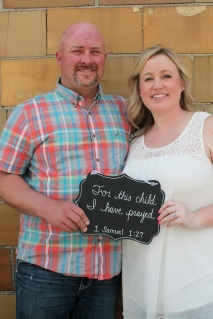 I promise to get back to regular blogging.  I have so much tell you about the joys of becoming a mother….the nausea, exhaustion, mood swings, and more!  I doubt I’ll hold back much though I’m sure my future children wish I would.
It’s just too exciting not to tell you it ALL.
You can thank me later!
Two more pics I created with ideas from pinterest……  These are things I’ve already learned that I’ll do for baby #1 but probably not ever again, so why not, right?

AND I received my first ever Mother’s Day present this morning.  I cried.  Maybe it was the hormones or maybe it was because I was so stoked my husband recognized that.  He’s a busy guy right now so it’s so nice to be thought of.