Over the past few months I’ve been spending a little bit of time here and there with Ed at a little shop in Knightstown called Bull Dog Ink.

You see, many many years ago while down in Ft. Myers, Florida I made a pretty senseless decision while consuming adult beverages and hanging on the beach with my good friend Katie.  We both thought it would be a grand idea to get some ink while on vacation……. though we had no plans or thoughts as to what we would get.  Katie ended up with angel wings behind her ear (which she says now look nothing like it) and I ended up with this… 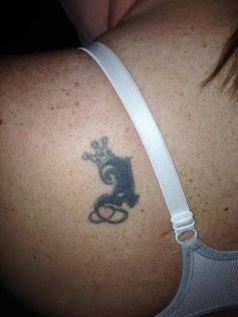 Now, you may be wondering WHAT the above is.

Well, I’ll tell you what it was suppose to be.

Warning, even what it was suppose to be is extremely stupid.

I wanted a capital letter A (gothic style) with a princess crown on top and a heart at the bottom.  Incredibly stupid.  Dumb.  Childish.  Stupid.

Did I say stupid?

Instead, I was left with a big freaking blob on my back to which everyone always asked, “What is that?”

I was getting really sick of answering that question.  I wanted to make it something meaningful.  I thought about it for years….YEARS!

Which, by the way, is exactly what you should do when thinking about a tattoo.

This was my 5th tattoo which covers up my 2nd tattoo.  My first one I thought for several days about.  (probably not long enough but I still love it….)  My wrist tattoo I thought for a long time on and my foot tattoo the same.  I love my tattoo’s and believe it or not, my guy has none.  He has no desire for tattoo’s and still loves me.

If I can give any advice to my children or the youth of America in reference to tattoo’s it would have to be THINK ABOUT IT.  Be absolutely sure you want it, you are okay with the location of it, and you’re good with it being there forever.  I may definitely regret mine when I’m old and they sag and wrinkle and look disgusting…who knows.  I’m not too worried about it at this point.

I don’t encourage children to get them.  In fact, most of mine are completely hidden at my job.  Even if they are seen, they have nothing to do with my “work performance” either and some people will certainly disagree with that.

I officially love ALL my tattoo’s because I made a big change.  They all have heart felt meaning and are filled with memories.  For this, I am grateful.

So he sent me this drawing and I just about died….

Just seeing the rough draft I was floored.  It was exactly what I wanted, and more!

The first appointment was ROUGH I tell you ROUGH!  Everyone always asks me, “Does it hurt?” To which I really want to reply Ed’s response…”No, it feels like unicorns licking my back.”

After the first appointment I had this… 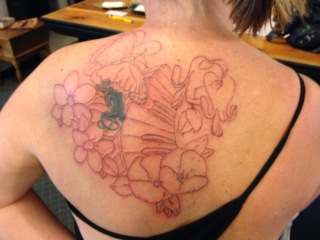 I’ll admit.  After the appointment was over I was a little worried about how that lovely little A was actually going to cover up.  I had faith in Ed, but it was hard for me to picture.  You’ll see he’s basically a tattoo genius because he had the eye and totally knew what he was doing.

3 or so weeks of healing and I went back for round 2.  Round 2 actually wasn’t that bad at all.  In fact, I got a ton of online shopping done for Christmas.  I read several chapters in my book.  I just chilled for about 3 hours while the needle hit my back.

Then I had this… 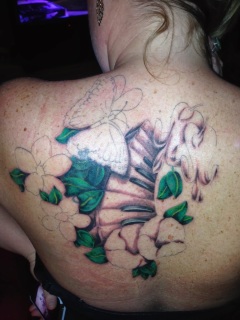 The above photo doesn’t really give it the justice it deserves.  The greens were and are so very bright.  The shading is incredible.  The piano keys obviously came to life and I was amazed!

Over 4 weeks later I went back and was looking forward to hopefully seeing the end result.  I wasn’t sure if another 3 hour session would get it done, but I was happy to sit that long if it did!

This time was definitely more painful than the second session.  The bleeding hearts below my neck….ouch.  The tulips down there on my spine….ouch.  The butterfly was not nearly as bad as I thought.

Still, I feel like a champ.  I read about 12 chapters in my book.  Stalked people on social media.  Chatted with Ed a bit…and let him do his thing.

Then, he was finished.

And you can’t even tell what was there before.  That makes it even better!

The red flowers are the bleeding hearts…..the flowers I always begged my mom to buy and plant in our flower beds.

The yellow tulips because she loved them so much.

The white (somewhat bleeding in the above pic….very fresh!) flowers are stephanotis and were a part of the bouquets in my mom and dad’s wedding.  I’ve seen pictures and still have their wedding announcement which is WAY more detailed than what we have today.

The butterfly because she is always with me, but I feel it most when I see those.

The piano keys because music was a connection we will forever have.  When I sit down to play, even now, I think of her and sometimes cry.  I know playing piano made her proud because she loved to play herself.  I know she loved to hear me play.  It was and still is a huge part of my life and a part that makes me think of her.

There is no cardinal on this tattoo even though I wanted one.  Ed basically told me that to look correct the cardinal would have to be GIGANTIC in relation to the flowers to make sense and although I love cardinals…I don’t think I want a huge one on my back with an already large back tattoo.

Some people say tattoos are addicting.  I wouldn’t say addicting.  I just think for people who like to express themselves it is a way of doing so.  It’s a way for me to permanently display the things that I love and who I am.

I wasn’t planning on a large back tattoo to cover up the mistake from Florida.  However, I did ask a lot of Ed.  For what I wanted to cover up….and what I wanted….it was going to be “go big or go home.”

I’m pleased, to say the least, with my tattoo.  It is incredible and I’m so very blessed to have met someone with amazing creativity.

Fortunate to have a wonderful tattoo artist Ed and friend Hannah who hooked me up,